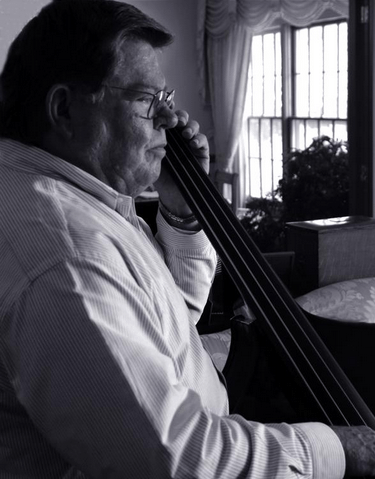 Jim Shuptrine’s love of music began when he was about five years old, when he began trying out his older brother’s trumpet. Jim used to accompany his brother Hubert to band practices at Chattanooga (TN) Central High School, and his interest in playing an instrument was born. He started playing the trombone and received several state and regional first place awards before he was in the sixth grade. His love for music led to being both the Captain of the Concert Band and the Marching Band at Central. His fondness of animals played a close second in his interests, and it led him to the University of Tennessee in Knoxville as a pre- veterinarian science major. He had received a small scholarship from the Music Department at Knoxville, so in order to take advantage of that, he played in both the UT Marching Band and the Concert Band. He pledged to the Delta Tau Delta fraternity, which opened another chapter in his life.

With a musical background, Jim was drawn to join a folk music group named The Cumberland Trio, all fraternity brothers but one. They needed a bass player, so he tried playing a bass….a new instrument for him, The group need a foundation for the guitars and banjo, so it was a win-win for both Jim and the members of the group.

Jim graduated from UT in 1966 with a Bachelor of Science degree in Sociology, with a minor in Psychology…..quite a departure from music and veterinarian science. After a two-year stint as a regional sales rep with General Foods, Jim joined his brother Hubert, an up and coming artist, as his  sales agent and publisher. At the time Hubert’s paintings were fetching prices ranging from $25.00 to $75.00 After 13 years of managing the artist’s career, transacting all of his sales, and steering and promoting Hubert’s career, his paintings were bringing $10,000.00 to $60,000.00. Hubert Shuptrine collaborated with James Dickey, the nationally recognized poet and author, in putting together a book of paintings by Shuptrine and text by Dickey, which was published in 1974 by Oxmoor House of Southern Living. Jim and Hubert worked as a team in designing the large book (usually known as a coffee table book) which had to be hand-bound due to its size.

When deciding about the number of books to print in the first printing, Oxmoor said that they would optimistically print 10,000 for the first edition, which would be quite a success if they sold out.”Jericho The South Beheld” broke every record in art book history when it sold 168,000 copies. Hubert’s name became a household name in the world of art. His originals were in high demand, and he could not begin to complete enough works to satisfy his followers.

In 1982, Jim accepted a position with Vincent Printing Co. in Chattanooga, TN. He became the Executive V.P. of  Sales, until 2010. His skill as an instrument-rated pilot was instrumental in building his brother’s career, and his success at Vincent Printing.

Over the years, since 1974, when he first learned to fly, he logged well over 3,500 hours of flight time….flying many times to California, Canada, the Bahamas, and the Dominican Republic. During his years as a pilot, he landed in every state at least once, and flew across the U.S. border on many occasions.

Today he is semi-retired, and lives on 30 acres in Signal Mountain with his wife  Barbara. They have four children, 10 grand children, and one great-grand child. He’s often fishing on his fish pond for dinner, or he and Barbara are riding their Harley Davidson.